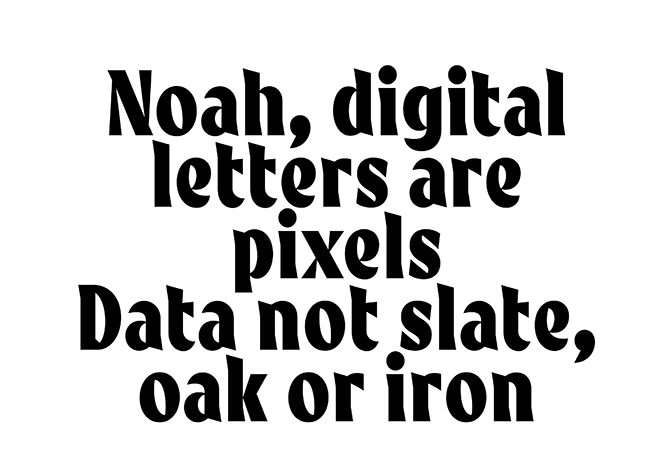 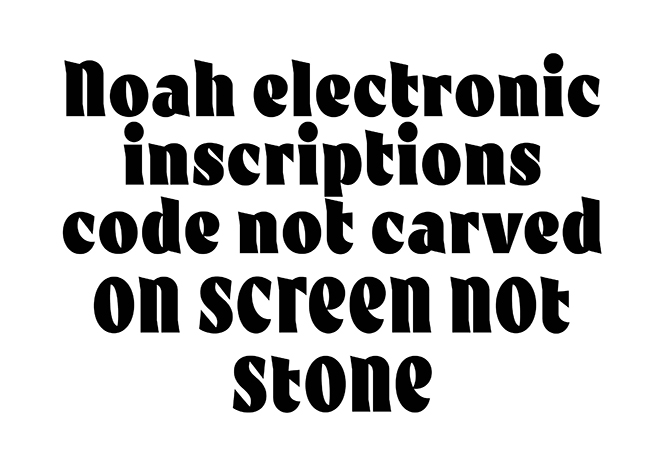 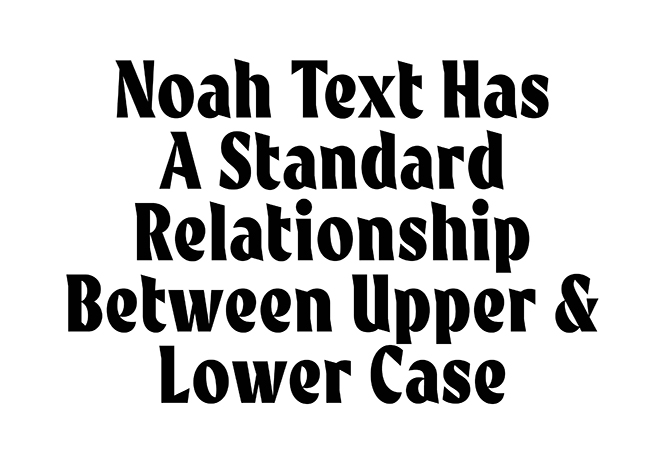 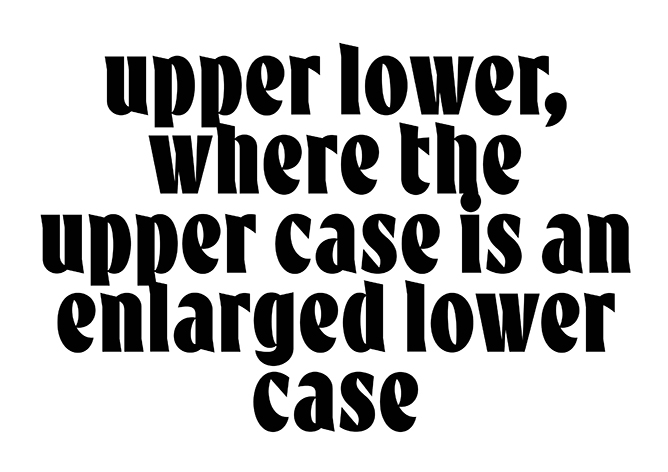 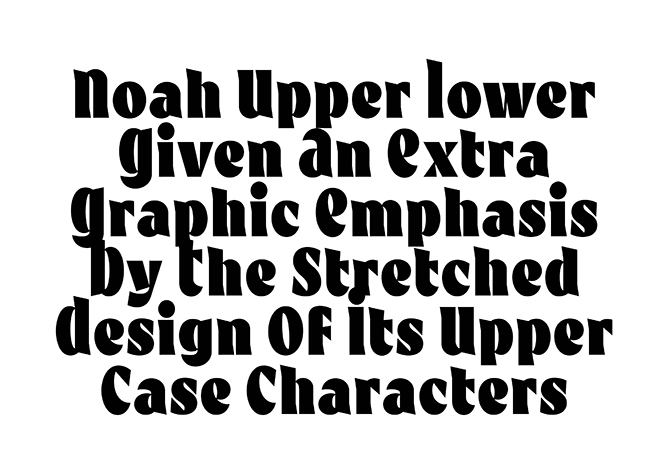 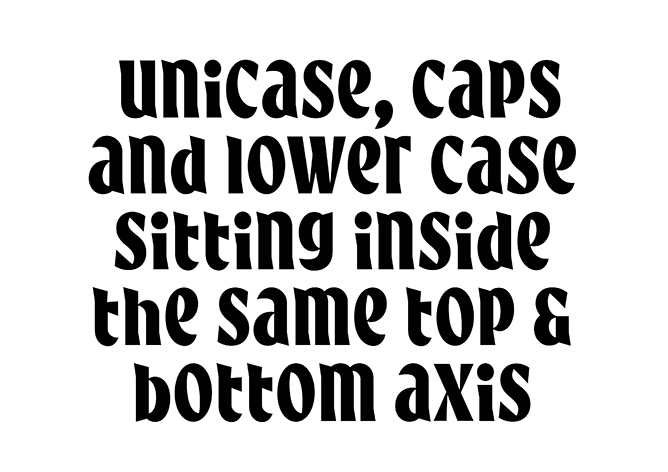 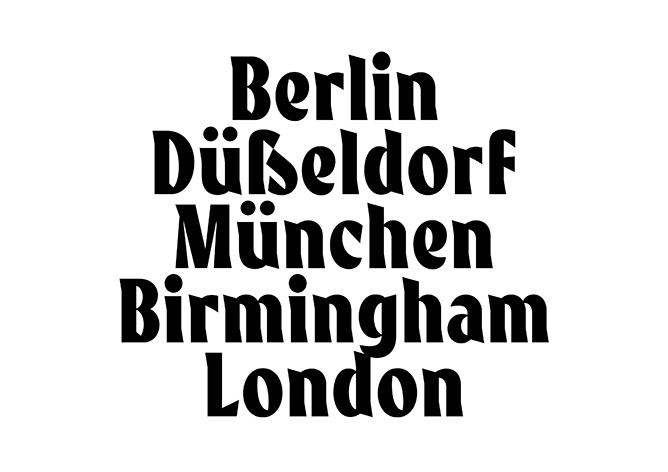 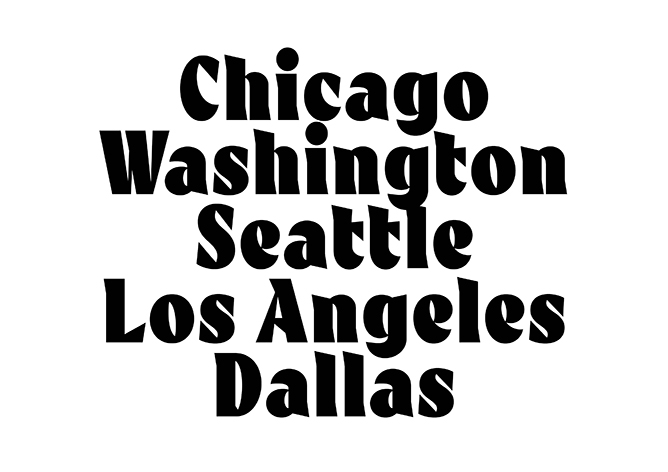 The lettercutting of studios such as Cardozo Kindersley, in materials such as stone and wood, but also glass, metal and paper, is often commemorative. Often for headstones and plaques, in architecture or architectural materials. Built to last. Lettering is drawn to be cut, carved or chiselled, fit for purpose – for its method of making and appropriate to its message. It’s a big thing to commission, as I sadly know, and a big thing on their part to undertake.

Where digital technology has simplified and sped up a process that remains layered and complex, cutting out of stone or wood suggests something slow, contemplative, spiritual. Designing by computer removes or separates the connection between drawing and the design process, lettercutting celebrates this.

Typeface designers draw of course, sketch initial designs, sometimes draw or write letters entirely on paper and scan and digitise these as finished artwork. I don’t.

Lettercutting has a direct connection with the past. it has a particular resonance, it is made with care and the joy of craft. Its permanence, its expertise, the materials used, are all expensive, feel special and important. Unlike the more ephemeral ink or paint-craft of signwriting this permanence is what protects it from being overtaken by readymade, automated or mechanical alternatives. Studios are small, few in number but thankfully still here.

Letterforms aren’t all the portentous serif capitals you would expect, there are beautiful seriffed italics and various versions of humanist types, often stretched and ligature-heavy. There is an obvious, linear connection with the past which adds to the resonance of the work but a fresh, breathing energy.

There’s a logic to the shape of carved type, dependent on the process of carving, the angle of hand and arm. So carved type looks different to brushed or written, the differences in material requiring subtleties of difference in craft skills. Drawn type is freed of this logic so is defined more solely and specifically by idea. Computer-drawn type more so, with ideas of craft being skewed by the digital-automated short-cuts of its process. The huge increase in availability fonts that this has allowed require new designs to be ‘new’. To express new ideas, difference, relevance.

Of course lettershape is defined by historical precedent and the needs of its use (I’m paraphrasing).

There is something skeuomorphic about too close a rendering of an historical model or precedent. By skeuomorphic I mean inappropriate, irrelevant. A layering or veneer of old onto something newly made, unnecessary to its function. Its styling a copy, so inappropriate, or unnecessary to its method of manufacture, irrelevant to its time. They are renderings, or pictures of old things, not new things in their own right.

As with the leather or brushed steel textures of the Mac interface, so with the rounded serif of another ‘new’ Garamond or correct angle of letter terminal of the latest ‘new’ mid-century Grot.

Though readability requires familiarity of lettershape (amongst other things, I’m paraphrasing again), this can be expressed in new and different ways. Gerard Unger’s Swift is an example of this, and in the particularly challenging field of designing type for newspaper use. There are many others.

There are many ways to be modern, not just the generic and over-used model of geometric, modular or rounded, or angular technical. Advances in the typographic capabilities of web browsers and increases in screen sharpness allow for greater choices for the ever-expanding needs of digital media.

Mixing ideas or inspirations brings something new. Noah’s basic shape, heavyish weight and its use of angled letter-endings and sharp connection between its internal shapes suggest carving, as if the letters are made to be inscribed. It is very loose in its expression of these ideas, there are other reference points too. It has references from historical models but is really a mix of our typefaces Harbour and Asperity, with their bold, simple, graphic and angular letter shapes.

Noah is available two weights – Medium and Bold – and in three versions; Text, which has a standard relationship between upper and lower case; Unicase, which has upper and lowercase sitting inside the same top and bottom letter height, ascenders and descenders and accented characters included;  Upper Lower, where the uppercase is a stretched, enlarged lower case. In doing this it borrows an idea from our typeface Ano, so the cross-referencing with other Alias typefaces continues.

The same character exists in several different forms, with lower case characters having two or three levels of stretch or shifts of position along the baseline. This allows plenty of scope in word shapes, for words as expressive, decorative objects.

While the medium weight has a Berthold Wolpe-ish Anglo/Germanic feel (he moved from Germany to England to flee the Nazis), the Bold weight has something of Tom Carnase’s Grouch. Grouch is a kind of remixed 1970s heavy weight of Caslon. Carnase is a master of bold, idiosyncratic and expressive interpretations of classic typefaces such as Caslon, Didot or Victorian era Fat Face style headline types. He is also a phenomenally good hand letterer, working with Herb Lubalin on some of his most renowned designs. So it’s an unplanned or unintended but heartfelt acknowledgement of my admiration for his work.

If Noah is essentially a continuation of Harbour, Asperity, Caustic, maybe Text and Klute a bit also, maybe it’s time for a new idea.

There is a healthy stonecutting community. Thanks to Phil Baines for pointing me to memorialsbyartists.co.uk, a site that brings together outstanding practitioners of their craft. If you’re a designer and you bandy that word around about your own work, you should go to that site and see the real thing.