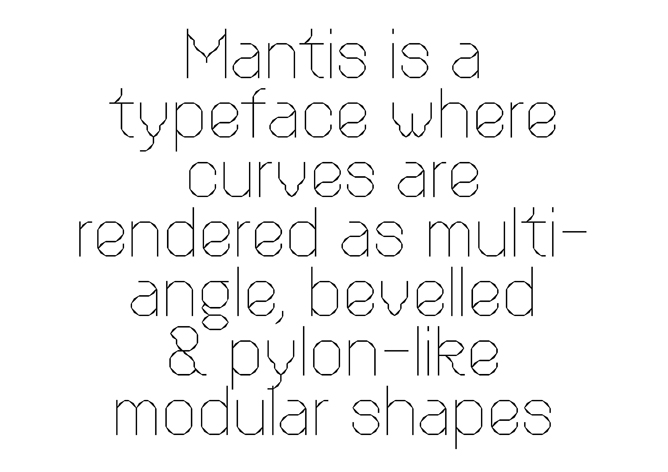 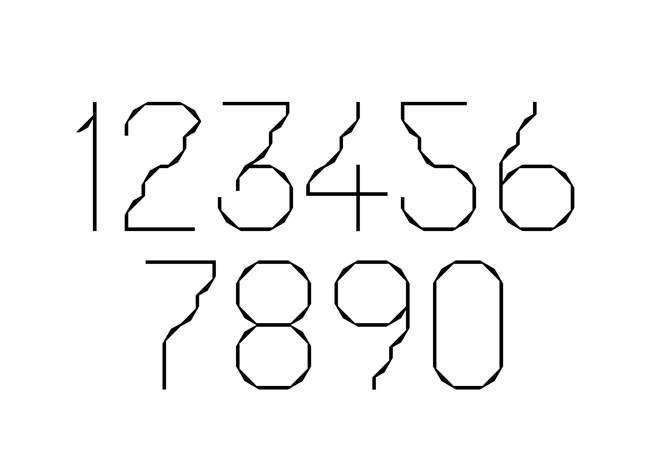 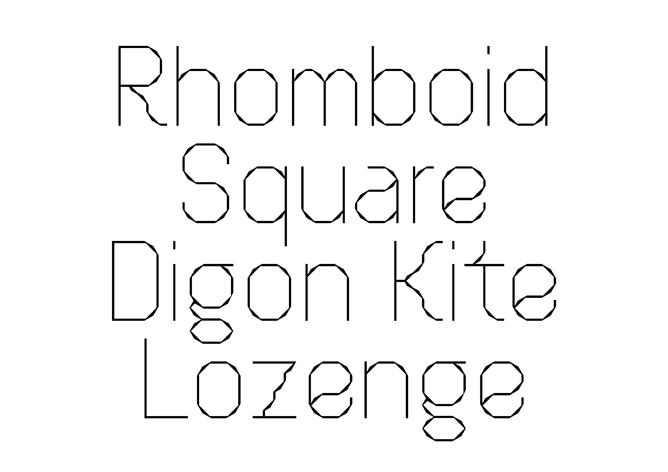 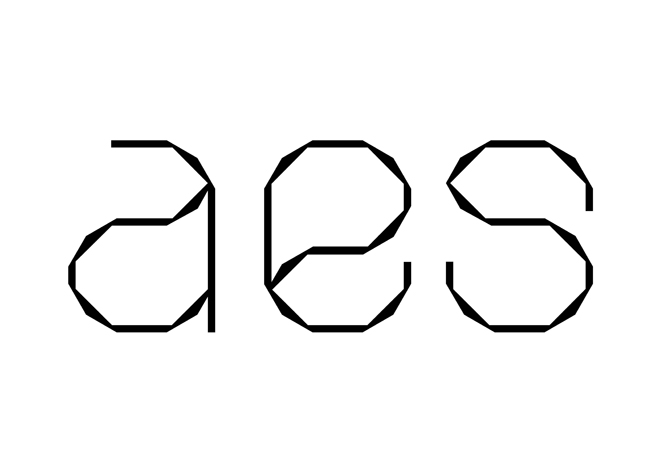 Mantis is one of our earliest typefaces, designed in the early 1990s. Designed in one weight, maybe for a client, more likely as a test.

It is a typeface where curves are rendered as multi-angle, bevelled-like shapes, deconstructing them as if applied through a filter, but not quite a curve at low resolution. There is also a suggestion of the facetted edges of jewels.

Though called Mantis to suggest the characteristic shape of that animal, they are more pylon-like. Mantis is modular, the diagonal shape is consistent(ish) throughout the whole typeface, but there is enough scope and movement in the way everything fits together to give the letter shapes difference and individual character. Though curve-less, and so ‘hard’, Mantis’s construction is such that the typeface does seem to have a roundness, specially so from a distance.

Mantis has something of the appearance of the lowish resolution first-attempt fonts of DTP design, from the middish 19980s. Most notably designed by Zuzana Licko of Emigré, these were initially designed as bitmap typefaces with public domain software on computers with a tiny 512k memory and no hard drive. Software and hardware steadily improved.

As Emigré’s Rudy Vanderlans puts it this was a ‘seminal time’ in graphic design. These newly developing and improving digital processes allowed for an unprecedented level of control over type, layout and image, and opened up new possibilities in self-publishing, authorship and entrepreneurism. The striking, hugely influential Emigré magazine documented and drove the new aesthetic. This is particularly evident in Licko’s typefaces, sold through the magazine and online.

Licko’s early designs in particular had a sureness of touch and a real missionary zeal – this determination to produce work that came from the computer’s capabilities outwards. The layout, mixing typefaces, type sizes and line lengths in multi-layered freeform page designs, as Vanderlans says, made each issue a kind of extended type brochure.

As Licko said in an interview from 1986 “My aim is to explore two things. First of all, I like to experiment with what the computer can do with things that were not possible with other technologies. I like to design letter forms that work well with the computer, both for pragmatic reasons and stylistic reasons”. It is this that is important beyond historical precedent, designs makable within the parameters available.

The development from bitmap to outline typefaces was made possible by the PostScript programming language developed by Adobe and made available in 1985, and the release of the font editing software Altsys Fontographer. This made drawing precise and scaleable outline fonts constructed from bézier curves possible.

At this time developments in software outstripped hardware, in terms of memory space, processing power, rasterizers and output devices. So to save precious memory space typefaces used either straight lines, geometric curves or a limited set of easily rendered angles. Simple shapes also meant quicker desk-top printing. Emigré’s Modular and Matrix typefaces are examples of this, being essentially developments and redraws of their earlier bitmap designs, with bézier curves and diagonals, not built from blocks of squares. For example, the serifs for Matrix are at a 45 degree angle, that most easily and smoothly rendered and quickly printed.

The newly available laser printers used in desk top publishing at this time provided a ‘smooth’ printing option as a short-cut automated way of increasing resolution of bitmaps from screen to printer. Early Macintosh computers processed 72 dpi bitmaps into 300 dpi bitmaps for laser printers, giving an approximated rounded effect. Emigré’s Citizen typeface is based on this idea with a blocky diagonal, polygon shape of staggered angled lines instead of the stepping of pixel squares. It is a basic, clumsily and abrasively modern typeface.

Mantis has something of this look, but its design is less arbitrary than Citizen, it it more systematic and simpler in construction. It is more about celebrating this alternative to a curve, giving it a separate, graphic and dramatic logic.

Mantis is available from MyFonts, T26 and Fontworks

This first and second generation of DTP typeface design is discussed on Emigré’s website.