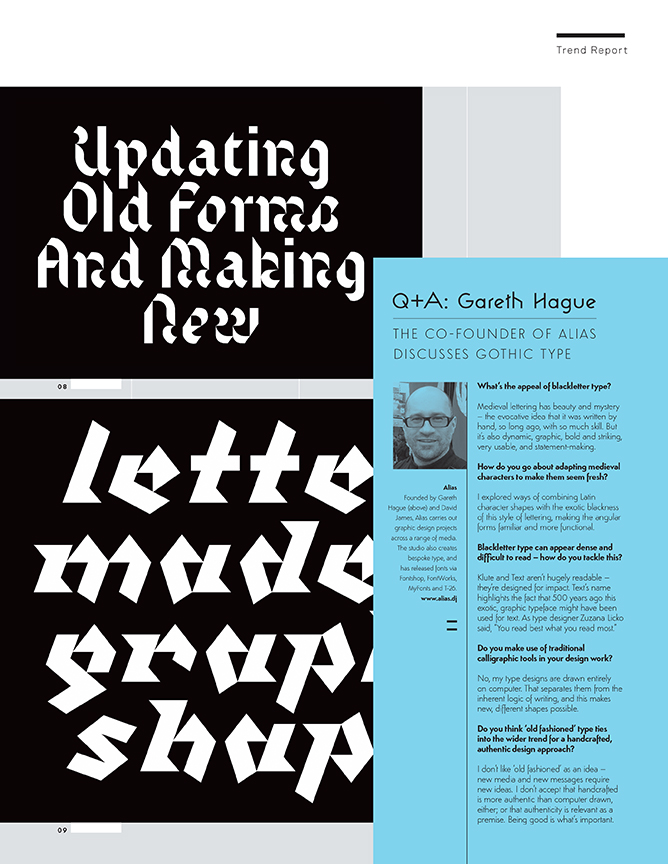 The full interview for Computer Arts Collection, part of a feature on Typographic Trends. Available February 2013.

1. What’s the appeal of blackletter-style type, for you – why do you think it’s enjoying a revival?

The popularity of Blackletter type is odd in many ways. Medieval typography’s associations, particularly religious text and Nazi Propaganda, should make it deeply unappealing in a secular wannabe-tolerant society. It is also difficult to read, and the values the style represents seemingly old, or out of fashion, or out of context, where the other creative arts express modernity through minimalism, technology and ease of use.

However, it has been consistently used, certainly throughout the twentieth century, whether by iconic figures such as William Morris, Jan Tschichold or Herb Lubalin, or any current example. Medieval lettering has beauty and mystery, the evocative imagery of having been written by hand, so long ago, with so much skill. But also it’s dynamic, graphic, bold and striking, so usable, statement-making. In contemporary popular culture, the Gothic heritage of the form makes it appropriate for the doom laden imagery Heavy Metal band logos, and street-style lettering and tag graffiti often references or takes influence from the decorative strength of the form.

2. How do you go about adapting the Medieval / Gothic type style to make it current and fresh?

I explored ways of combining latin lettershapes with the exotic blackness the lettering has, making these expressively angular letterforms familiar and more functional. This has always seemed more relevant, more interesting, than a more direct redrawing. Text and Klute do this in different ways. Text constructs letters from a series of graphic shapes, swashy curves suggest writing with a brush, letter elements connected at a sharp point. Its letterforms have the modular similarity of Blackletter styles. Klute mixes references from blackletter and the freer shapes derived from tagging, so it looks as if it was written with a thick marker pen as much as having been carved with a chisel.

3. Traditionally, Gothic typefaces are dense and can be difficult to read, how do you tackle this challenge?

I don’t think Klute or Text are hugely readable, they’re designed for impact. Text’s name highlights this issue of legibility, and the fact that 500 years ago this exotic graphic typeface might have been a design for text. As type designer Zuzana Licko said – “you read best what you read most”.

4. Do you consciously draw on the look and feel of traditional calligraphic tools and techniques in your type design work? Do you experiment with pen / brush work as part of the development process?

No, my work has nothing to do with calligraphy, pens, brushes, chisels etc. My type designs are drawn entirely on computer. That separates them from the inherent logic of writing, the shapes made by the movement of hand and arm, and the thickness of line determined from the angle of brush or pen. This makes new, different shapes possible.

5. How do you feel this re-emergence of ‘old-fashioned’ styles of type ties into the wider trend for a handcrafted, authentic approach to design?

I don’t like old fashioned as an idea, new media and new messages require new ideas. That doesn’t mean you can’t take references from old ideas, just mix them and make something new. I don’t accept that handcrafted is more authentic than computer drawn, and don’t accept that authentic is relevant as a premise. Being good is what’s important. Certainly there is a resurgence in hand drawn lettering, as there is presumably a need to make a connection with the human-ness of the craft process. Personally I’d like to see this expressed in more progressive ways than traditional forms of calligraphy or handwriting.